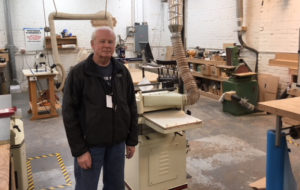 Featured maker Allan Bacon in our woodshop at MakeICT

One of the most wonderful things about MakeICT is the wide array of experience levels in our makerspace. We have brand new makers who’ve gone from knowing nothing to making art with a plasma cutter in six months. We have highly experienced makers who’ve been creating great things since before MakeICT was around. Allan Bacon is an experienced woodworker whose tables caught our eye, so I sat down to talk with him about how he got started and where he finds inspiration. 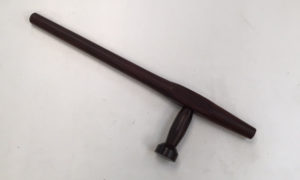 Allan has been woodworking for 22 years. He originally started in to make martial arts weapons when he wasn’t satisfied with what was commercially available, and diversified over time into different wooden styles. A few years ago he saw a live edge table and admired the juxtaposition with the natural edge and the glossy, smooth top. He had just retired from the aircraft industry and had time for bigger projects. 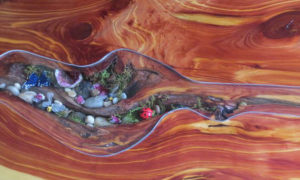 Inspired by pacific northwest artists like Greg Klassen and George Nakashima, live edge tables retain the outer bark of a slab of wood. Some have natural holes to fill in, other tables are made by splitting the slab in half lengthwise so the bark edges are turned to face each other. Allan has used different techniques to fill in the center: resin fill, acrylic or glass tops, LED lights, even phosphorous powder mixed in to casting to glow in the dark. 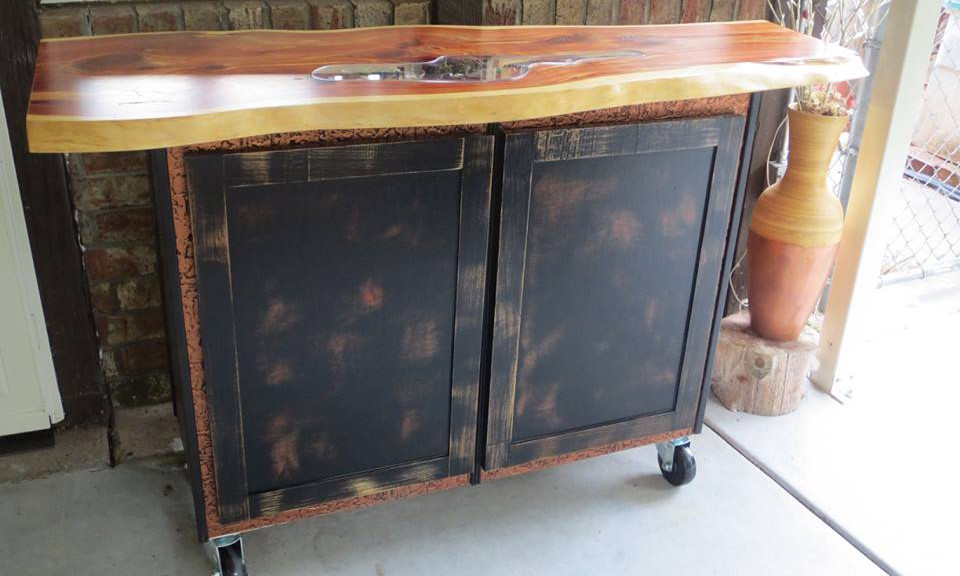 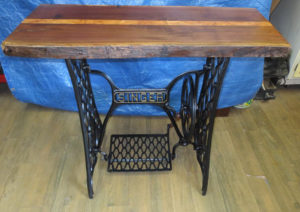 Allan gets his supplies from Richard’s Wood Shop in Kechi, Cook’s Woods online, Intermountain wood, and friends around the Wichita area. For one table he used an antique singer sewing base. There was a lot to learn in taking the treadle table apart, cleaning it, and re-assembling the cast iron parts to work together just as they had since the 1890s.

Like many of our members, Allan has his own shop at home but he joined MakeICT in its first few years because we had some tools he did not have, like a 15″ planer and CNC shopbot router.

He says he recommends it to people all the time and has talked with plenty of woodworkers in other cities who are jealous of what we offer for $25 a month. “For someone who would like to get started in wood, the MakeICT project classes are a great intro to the world of woodworking. The projects use several of the machines in the shop and the instructor is right there to help along the way,” he says, “Plus you will meet other people with similar interests, so it’s a good networking opportunity. The people there are usually more than willing to answer questions and are glad to show you their projects.” 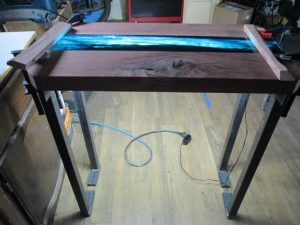 “For me, MakeICT offers access to machinery that I couldn’t begin to afford. And with a fob/card you have 24/7 access. You don’t have to schedule around “Open” hours. Plus there are machines that I’ve thought would be interesting to learn, but had nowhere to do so. How does the average person get access to a laser cutter, much less learn how to use it? Or a CNC plasma table? Or a 4’ by 8’ ShopBot? Only at MakeICT.”