We met a lot of great people and had a lot of fun going to the 2018 Nation of Makers Conference (NOMCON).

Most of us (David, Malissa, Logan and myself) set out Friday morning… well Thursday night really.  It is 2:30am when the train leaves Newton, Kansas heading West.  If you have never taken the train, you should at least take one trip.  We watched the scenery from Western Kansas, Colorado and New Mexico fly by from the Observation car as we anticipated the conference.  When we made our final stop late in the afternoon at Lamy, NM, we realize we had landed in a place way smaller than Newton.  The “bus trip” from Lamy to Santa Fe was guy driving a hotel van with just the four of us and the other two people who got off the train in Lamy.   No one had cell service until we were within a few minutes of Santa Fe.

Sam picked us up in his rental car at the dropoff location in Santa Fe and we made our way up to our AirBnB rental.  This is the first time I have done AirBnB and it was quite interesting.  We stayed at an “Artists’ Hidaway”.  It was open and airy and definitely full on New Age.  After taking in a local meal, we all retired back to the BnB except for David who wasn’t feeling well and got a hotel room.

The next morning we made our way to the conference.  After a morning conference opener that was mostly thanking everyone, we got down to business.  We tried to choose separate sessions to try and and gain the most from the conference.  My first session was titled the Five Stages of Grant Writing.  As I went into the room, I realized that this conference was not going to be like the ones I had attended for work.  There were grouped tables and rather than listening to a single speaker, we talked a little bit about who had Grant Writing experience and who didn’t and what people thought was important.  Someone took notes that we all could share (which was good, as the conference center had spotty WiFi which we quickly overwhelmed.)

The next session I had was the one I was to lead: “Moving a Makerspace”.  My session went pretty much like the first as we networked and talked about who was moving their makerspace and who already had.  One of the fellows took some notes.   I promised to take the notes and what we learned when we moved to make a book for all the makers about “Moving a Makerspace”.

There were a couple more sessions that afternoon that went much the same way.  I realized the conference was more about networking than anything else and set about making conversations with many of the different makerspaces.  We have some differences, but many of the community makerspaces have problems and joys that parallel our own.

David mentioned he was going back home early as he really did not feel well.  That evening we went to one of the social events and met more folks from various makerspaces.

The next day heralded a much better crop of general speakers,  The theme of the conference was Intentional Inclusion and a very dynamic speaker told of her struggle to find shoes that worked well with her disability.  A speaker came to speak to us in spite of having major dental surgery issues.  We had a speaker talk to us about making special costumes for kids in wheel chairs.  ( You are not supposed to cry at a conference… but these were powerfully moving speeches.)  We should totally try to do the costumes for wheelchairs…

Finally Adam Savage got up to speak and I thought it will be hard to follow the wheelchair folks.  He held his own, but barely.  And then the rest of the day to network with other spaces.

We had more fun before we left.  Meow Wolf (the famous art exhibit/mystery story/funhouse) and Itchy-o (a percussion group) and a train trip back.

This is already too long, so see me or one of the gang for details 🙂

Photos from the trip 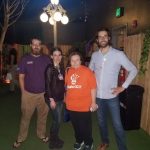 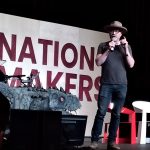 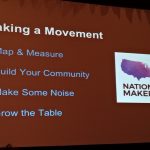 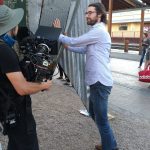 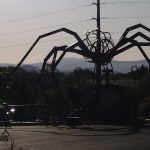